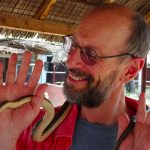 The following is a collection of recordings offered freely for study and practice.
All recordings are available to stream or download from our audio hosting site: cakelab.org/lamamarkwebber

To receive new recordings as they are released, please subscribe to the Podcast by copy/pasting the following address into your Podcasting Client (e.g. iTunes, etc.) :
http://www.cakelab.org/lamamarkwebber/feed.xml

AN INTRODUCTION TO ABHIDHAMMA – Two talks given by Lama Mark Webber on September 28, 2019. An introductory orientation for the current four-month retreat.

The Abhidhamma contains the essential teachings of the Buddha. It is a distillation–at times elaboration, and clarification of his core teachings from the perspective of what the ultimate entities worthy of contemplative Insight meditation are. Most of the Abhidhamma presents to us the topics of meditation that leads directly to liberation in order to profoundly understand our experience.

The Lama explains that Abhidhamma is an amazing taxonomy of mind and matter, and the interconnections and interdependence of these two. In this way, we gradually understand the distinction between concepts born from our imagination and what are ultimate realities. The ultimate realities are our topics of meditation, not imagination.

By contemplating this vast interdependence from the roots of causality, one is lead to discover Liberation (Nibbana or Nirvana), the total abandonment of greed, hatred and delusion–that which is unborn and unconditioned. The most precious gift we could offer to all sentient beings.

The retreat is taking place at Namgyal Choling Gompa and Crystal Mountain Society on Galiano Island, BC, Canada.
Listen or Download

The Path of Purification: recorded Dharma teachings given at the Bethlehem Retreat Centre Nanaimo, BC, Canada on November 1-3, 2019:
In these talks, Lama Mark covered most of the essentials components needed on the path of Purification and Liberation. He started with instructions on how to build a strong foundation for Dharma, especially strength and capacity—merit—for study, reflection and meditation. The Lama especially emphasized the need to unfold the profound wisdom of cause and effect. He gave straightforward instructions for it’s understanding and meditation; especially highlighting complete mindfulness through recollection combined with attentiveness. Also included are instructions and explanations on the non-dual realization of the open, untainted, changeless, luminous nature of the mind.
In these talks the Lama also emphasized the importance of unfolding:

The meditation of “giving and taking on the breath” is part of the mind training (Lojong) transmitted by the 12th century Tibetan Lama Chekawa Yeshe Dorje. It is based on unbroken transmissions from the 10th century Indian saint Atiśa Dīpaṃkara and his Sumatran guru Dharmakīrtiśrī (Tib. Serlingpa). This profound meditation is widely taught in all schools of Tibetan Buddhism. It is a powerful way to reduce selfish attachment, reduce suffering, spread compassion and generate the wish that all beings attain the realization of primordial wakefulness (bodhicitta).

The contemplations of Tonglen; relative and absolute bodhicitta, penetrative vipaśyanā—with and without support—guide us to recognize that before we exchange on the breath, all experience, including “suffering” doesn’t have any firm or solid existence. Without starting with this profound wisdom insight, we may breathe in the sufferings of sentient beings and believe we are being poisoned. And we may give out a breath of conditioned states, when it needs to be an attempt at unconditioned wisdom and compassion. The specific order of this classic practice is crucial. It enables us to act for all beings without harm by using breath-awareness to transform or self-liberate apparent suffering into freedom and great love. Tonglen, with the view of emptiness and compassion is the hallmark of breathing like a bodhisattva.

Please note that the 1st podcast contains  the recording of a full practice session with long gaps. Only the meditative section on the exchange of breath has been shortened to keep the recording time manageable. An outline of the practice can be found at: www.markwebber.org/wordpress/wp-content/uploads/2019/05/A-Tonglen-Meditation-LMW-July-12-2015.pdf

What is Buddhism? What is Dharma? What is meditation? A classical and modern perspective.

Teachings on Refuge: Lama Mark explains the nature of, and importance of taking Refuge in the tradition of Buddhadharma.

The Three Cycles of Dharma: From the Four Noble Truths to Dzogchen. The Three Turnings of the Buddha’s Teaching (Hinayana, Mahayana and Vajrayana) and the Nine Vehicles of the Nyingma tradition, including detailed teachings on Empowerments and Sadhana: A theory, instruction and practice course.

Mini retreat. The Six Parami: Meditation, instructions and practice on the Parami, the six key relative and absolute practices and attainments to carry us over to the Transcendent experience: step-by-step teachings and practice.

Mini-retreat.  All about Karma: Meditations on causality using mindfulness as the tool – The root and beginning practice of Insight/Vipassana

Allowing the Mind to be Easeful with Life: What are the reasons for cultivating an easeful body and mind? What do we need to cultivate, the key steps and stages.