Lama Mark Webber (Lama Yongdu Chokyi Gyaltsen) has been studying and teaching Buddha Dharma (the teachings of Liberation through the traditions of Buddhism) for over forty years. He was born in 1956 in Toronto. Through a strong interest to understand awareness by using the mind to study the mind, he started practicing meditation at the age of 16. He used the only book on meditation in his local library for his instruction; “Tibetan Yoga and Secret Doctrines” edited by Evans-Wentz, a collection of Kagyu, Nyingma and Mahayana meditation texts and teachings. In the same year, determining that he needed an accomplished spiritual teacher, he began to formally study Buddha Dharma and meditation with his first teachers Karma Chorpel Dolma (Beatrice Raff) and Lama Karma Thinley Rinpoche.

The Ven. Namgyal Rinpoche was an extraordinarily great meditation master and a superb Dharma teacher who was a precious mentor to Lama Webber as well as to so many other beings. 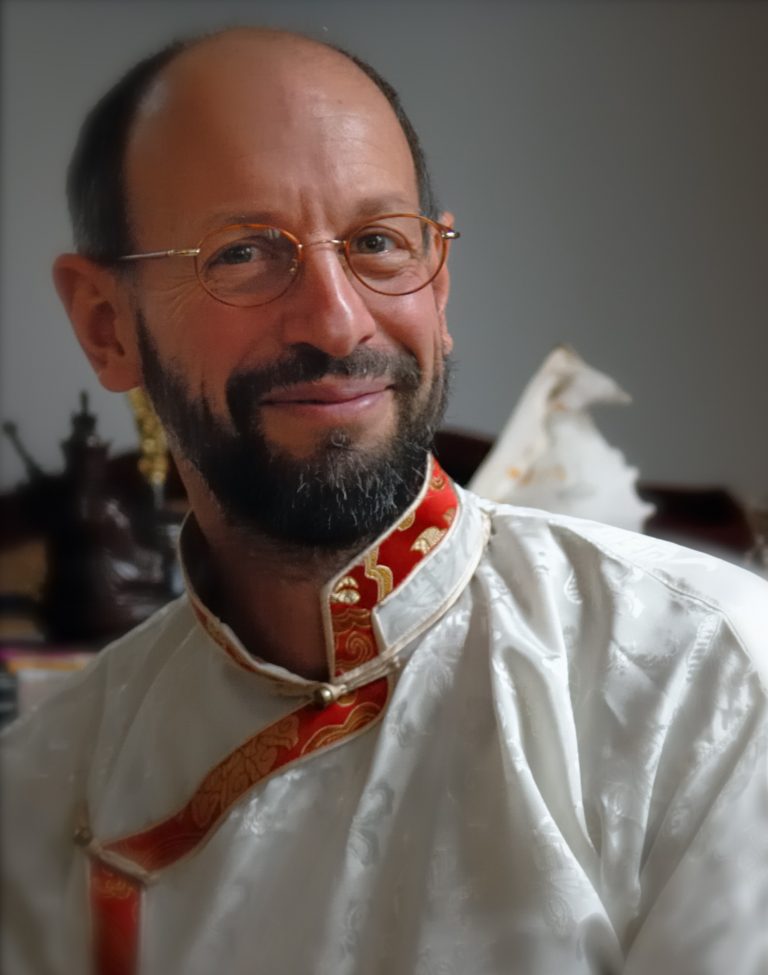 Training in Buddha Dharma and Meditation

Lama Mark spent the next ten years—between university studies and summer work—frequently traveling and studying with Namgyal Rinpoche and engaging in meditative retreat work. He was Namgyal Rinpoche’s principle attendant for one year between 1974 and 1976, and subsequently had the good fortune to attend, reside and travel with him for many periods over the next three decades until his Rinpoche’s passing away in 2003.

Namgyal Rinpoche instructed Lama Mark to begin teaching Abhidhamma and its meditations in 1975, to pass on a yogic tradition which Rinpoche received in Burma. Rinpoche gave this Abhidhamma transmission during a three-month period on the Polish Ocean Lines freighter, the Zgymunt Stary. In the following year he was asked by his Root Teacher to guide students in Tantric-Vajrayana meditations. In 1976, Rinpoche gave the novice ordination to Lama Mark, who held this for a number of years.

Lama Mark has completed extensive meditation retreats and periods of study, including the three years of Teacher’s Training given by his Root Teacher between 1975 and 1977. He has also studied with many other outstanding teachers from Eastern traditions including H. H. the 16th Karmapa, H.H. the 14th Dalai Lama, H. E. Chogye Trinchen Rinpoche, and for the last ten years with H. E. Drikung Lho Ontul Rinpoche, (who gave the Lama the Refuge name: Lama Yongdu Chokyi Gyaltsen).

During the 1980’s Lama Webber was a Resident Teacher during Namgyal Rinpoche’s seminary program at the Dharma Centre of Canada called The Academy. The title “Lama” was bestowed by H. E. Chogye Trinchen Rinpoche in 2001 with the name Lama Karma Tenpa Lekshe Yongdu. And in 2002 Namgyal Rinpoche gave encouragement and authorization for Lama Mark to bestow empowerments (wong-kur) in the Vajrayana Tantric tradition. He also attended Namgyal Rinpoche’s final Teacher’s Training in 2003 at The Dharma Centre of Canada.

He is the author of the books, “Why Meditate? A Heart Song of Vast Release“, “Union of Loving-kindness and Emptiness”, “Blazing Awakeness, a very brief outline of the progress of insight within the classic Abhidhamma and Mahamudra-Dzogchen traditions”, “Contemplating Illusion Through Loving All Life” , “Liberation of What? The Science Behind Meditation and Liberation, a very brief survey” and many study guides on various topics of Buddha Dharma. He is also the editor of the booklet of prayers and contemplations called “A Basket of Gems” and the Namgyal Yangzab Buddhist Community of Canada booklet of prayers and contemplations.

Lama Mark Webber is a Visiting and Resident Teacher for a number of retreat and Dharma centres including the Crystal Mountain Society, Galiano Island, B. C. where he resides nearby at Namgyal Choling Gompa Hermitage. He is the Guiding Teacher for the Queenstown Dharma Centre, New Zealand and for several periods during the past 25 years he was the Resident Teacher at the Dharma Centre of Canada (DCC) in Kinmount, Ontario; the Lama serves the DCC community as one of its four Spiritual Directors. He also teaches by invitation at many other locations in Canada, Guatemala and worldwide. In 2020 he helped establish the Namgyal Yangzab Buddhist Community of Canada (NYBCC), a nationally incorporated non-for-profit organization, acting as its Spiritual Director.

Lama Mark’s background also includes research in molecular biology and chemistry, as well as training in the fine arts and crafts. During his teens, he spent a year (1970-1971) studying organic chemistry under the guidance of  Dr. G. F. Wright (professor emeritus of Chemistry, University of Toronto), in his private laboratory. His mentors in molecular biology at the Ontario Cancer Institute (OCI), University of Toronto (1970-1972 ) were Dr.’s Alan Bernstein (President and CEO of CIFAR), Andrew Becker(d. 2015) and Barry Rolfe (ANU). After studying molecular biology in a course taught by Alan Bernstein within the SEED program he became a Summer Student Researcher where, under the direction of Dr. Andrew Becker he investigated whether phage λ viruses have the ability to use the DNA repair mechanism of the infected bacterial host E. coli. They do. In the following year, besides studying molecular biology and chemistry at U of T and at the OCI he continued a research project into the novel synthesis of a fluorescein-methyl methacrylate polymer with funding by Dr. Williams, Department of Chemical Engineering (UofT) (1973).

His Masters degree in Anthropology (1980) was supervised by Dr. Charles Laughlin (emeritus professor of anthropology and religion at Carleton University in Ottawa, Canada), and investigated the interconnections between meditation, ritual, neurophysiology and endocrinology, with the thesis: Ritual:A Model of Symbol Penetration. A number of papers and a book chapter were published on these topics within the neuroanthropological theory of “biogenetic structuralism”, and co-authored with: Charles Laughlin, Chris Stephens and John McManus.

He spent a year studying at the Toronto School of Art (1973-74) and in 1994 was a member of the Art Institute at Capilano College, North Vancouver studying and making  bronze casting under the guidance of George Rammell.

In the mid-1980’s he was a regional economic planner for the Government of the Northwest Territories (Iqaluit) and later became an economic and arts consultant in Canada’s Eastern Arctic. He taught quarry operations in Canada’s arctic and learnt sculpture in stone and clay. While working as a consultant in the Eastern Arctic (from 1987-1989) he studied stone sculpture under the guidance of George Pratt, Sam Pitsiulak, Phillip Pitsiulak and John McKinnon and was able to fundraise and collaborate on some major sculptures. In addition Lama Webber was a professional gemstone cutter, fulfilling commissions for a number of jewellers across Canada. After assisting in the securing of funding for initiating college level arts and crafts training in the Northwest Territories, he became (1989 to 1997) the Coordinator and Senior Instructor of the Fine Arts and Crafts Programs at Nunavut Arctic College in Iqaluit, Nunavut, Canada. In addition to administering and fundraising for the Program, he also taught gem cutting, art history and elements of design.

He moved to Nelson, British Columbia in 1997 where he took up the Executive Directorship of the Kootenay School of the Arts, Centre of Craft and Design. In 2000, he accepted the invitation to be the Resident Teacher of the Dharma Centre of Canada where he taught and studied during Namgyal Rinpoche’s remaining years. It was in those years that the Lama established a retreat and teaching centre in Rossland, B.C. before accepting the invitation to move to Galiano Island in 2007 and be the Resident and guiding teacher for the Crystal Mountain Society.

In the late 1990’s while on retreat with Namgyal Rinpoche, Lama Mark received a personal injunction by Rinpoche, to “know the minds of all sentient beings.” To further extend his contemplation of this instruction and following the advice of his teacher not to give up his strong interest and study of science for others, in 2001 Lama Mark decided to begin a long term study of the immense and unseen life forms of this planet.

The vast majority—perhaps over 99%—of all life on this planet is not visible to the naked human eye and most of these organisms are now considered sentient. All this ‘unseen’ life is interdependent and interconnected, communicating with most other life forms; from fungi and plants, bacteria and humans, to viruses and coral reefs, to cite only a few examples. Big life—humans, giraffes, coral reefs, trees and whales—all organisms, rely on these remarkable microorganisms for their physical and mental health, growth, illness and death. This study and contemplation has focused primarily on marine and freshwater algae, plankton and fungi. 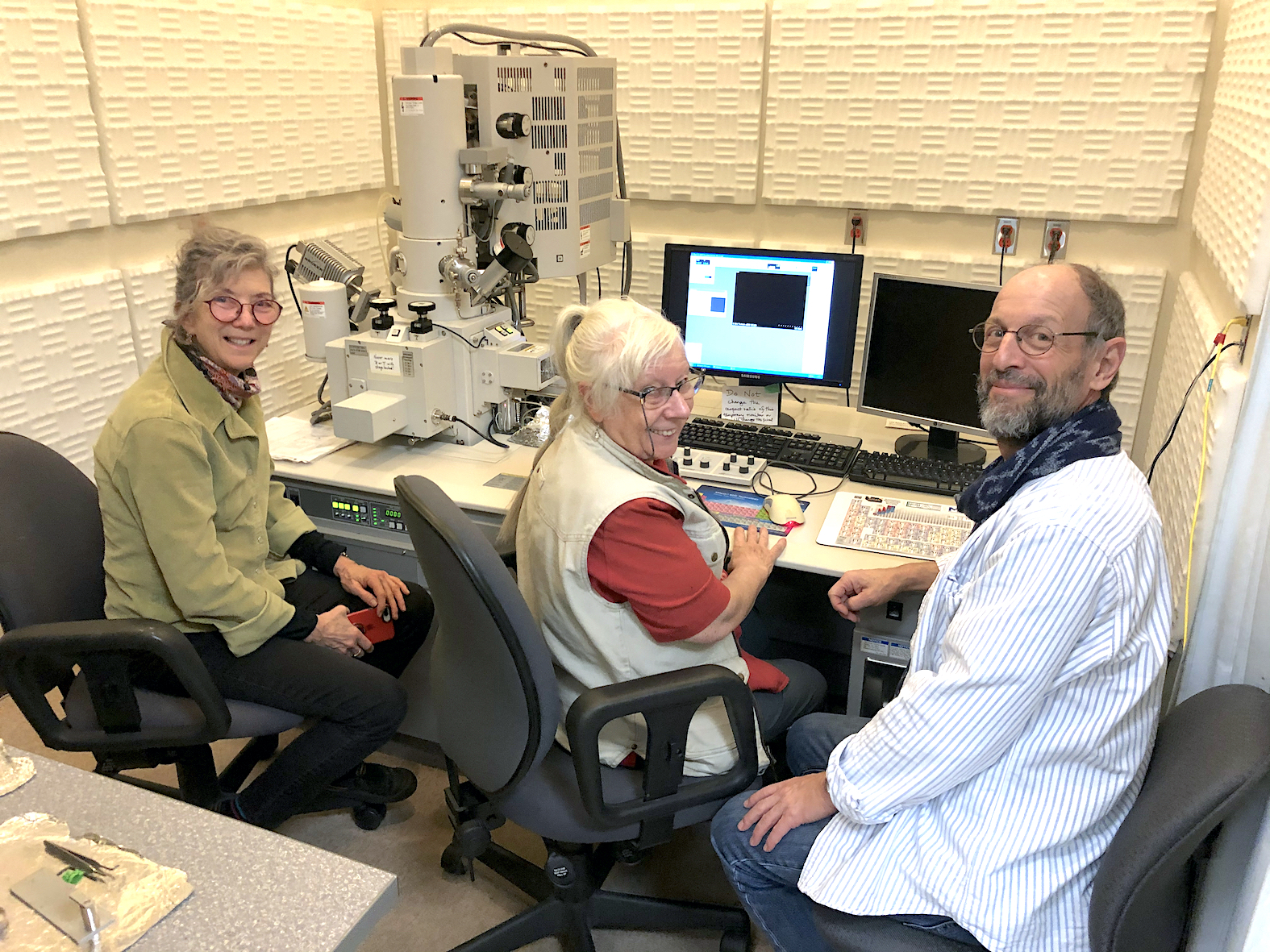 Beginning in 2001 with a Swift portable field microscope, followed by a Leica stereo-microscope and camera, the Lama traveled to retreats and courses to share his interest and knowledge in microscopic life through classes and via the internet. Many of his older light microscopic and scanning electron microscope (SEM) images (with brief taxonomic descriptions) can be found on the University of British Columbia’s Biomedia Image and Movie Database. More current images and taxonomic descriptions and observational notes are found at iNaturalist (Galiano Island, B.C.) .

In order to gain a deeper appreciation of biological principles found in most lifeforms, over the last ten years his research has focused on the taxonomy, ecology, life cycle, and stress of the coastal marine diatom Ditylum. In addition, a long term project is to: catalogue, photograph (light and electron microscopic imaging), review the current taxonomic status and species indicators, barcode the specimens and record observations of environmental and cloned cells of marine diatoms around Galiano Island and other areas of the Salish Sea (the last published research was 1976 and 1943). Other current projects include describing a marine fungi associated with Ditylum brightwellii, collaborating on studying the diatoms of eelgrass, describing a halophilic fungi growing in a concentrated Epsom salt (magnesium sulfate) solution and developing SEM microscopic techniques in collaboration with Elaine Humphrey at the University of Victoria’s Advanced Microscopy Facility (AMF).

Mark Webber is a founding member and a Board of Director of IMERSS (Institute for Multidisciplinary Ecological Research in the Salish Sea) a federally incorporated non-profit institute with its headquarters and laboratory on Galiano Island, BC.

Listen to the Profound Intent of the Sublime Dharma