In Honour of the Great Lama Namgyal

This morning when I woke up, I especially felt the great blessings of Dharma riches and jewels that were literally pumped into my veins by that great teacher, Namgyal Rinpoche. In fact, this discovery is a beautiful mystery—that nothing really got pumped in—however much was revealed, and it is available to all, like pealing back layers of gauze. It brings mist to my eyes to consider how deeply shaped and influenced I am by his vast mind, ideals and principles. Like a bright kernel in my heart and a stupa above my head, I am so often speechless with joy when he comes to mind.

He was a big guy in so many ways! Namgyal Rinpoche was a great father to me, always encouraging my talents, not letting me slip into what was easy. One day in Norway, when I was 20 years old, during a walk, Rinpoche asked me “what I wanted to be?” I replied—“like you, a meditation master!” He said “that is fine, but being a meditation master is not enough!” For one week, once a day we would go for a walk and he would ask me the same question every day; “what I wanted to be?” I would reply. “if not a meditation master, then a such and such…” Every walk I would offer something of my history, another becoming that I could see myself taking on like a costume: the ‘meditation master’, the ‘doctor’, the ‘acupuncturist’, the ‘chemist’, the ‘biologist’, etc. And every day he would say, “that is OK, good…”, then he talked about the occupation’s merits…”but try again, what else?” At the end of one week, he turned to me and said, “Mark, become no-thing!” My god! What a momentous instruction! Like a nail driven through a wall. I really heard it, an instruction I have tried to attain and keep very close to my heart. 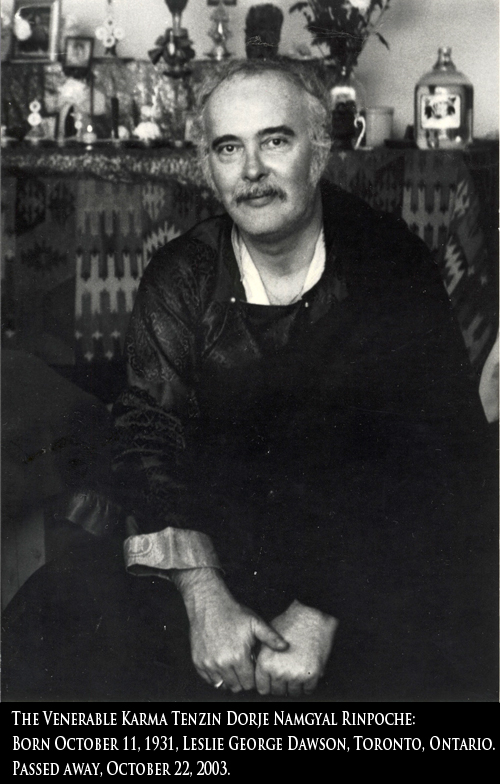 He was remarkable. A few words of his, here and there, of pith and essence, support and un-support, testing and re-testing could shift your being deeply. He raised the Banner of question and determination, challenge and inquiry, love and wrath, compassion and bright clarity throughout my being. Rinpoche was great — he constantly challenged everything — everything you were holding on to. He always taught and demonstrated the essence — non – clinging awareness — one moment with fierce determination, the next moment with love and humility, the next with pride and mystery, then with abandon and humor. He could display all the Emotions of the Dance with blazing, awake splendor. Above all he kept raising the Banner of Victory for all that had the eyes to see. Namgyal Rinpoche had the highest of ideals and some quirky notions, some of which I don’t even agree with to this day, but that does not matter a drop; what was really important was that he did not miss a moment of awareness of Dharma, probing to the very heart of the matter. If you did well, there was always more. If there were profound experiences, then there were more discoveries to be unearthed! And so too, he never stopped questing and discovering; that was so beautiful to witness. I enjoyed watching the joy in his voice and face when he unearthed another gem of realization, another way to teach liberation, a new sparkle of the natural state.

My teacher loved to teach, as he said to me before he died, “that is my duty.” His teaching of Dharma was wondrous and magnificent. A melodious voice of such depth, luminosity and power—always striving to bring about an ‘edible’ experience, a living presence of that which he spoke of through his remarkable speech—whether it was classic Buddha-dharma, meditation states or technique, Sufi dancing, Dzogchen, rose gardening, the Christian mystical life, animals encountered, stars and galaxies, scientific discoveries or a universal vision of Liberation. Outside of a Dharma class or Empowerment he rarely would allow those with him to use any Dharma jargon, Pali or Sanskrit words. Thus every activity, including the most seemingly mundane, such as watching a grade C movie, eating a meal from a can of spaghetti, shopping for gems, watching birds or talking politics, was an enriching tapestry of natural vivid awakeness. He was so compassionate, so awake and so utterly human: an exemplar of the teaching of the “Two in One.”

No phenomena and no Dharma was ever stale to his mind. He had the most wondrous ability to cut away all chaff and penetrate to the essence. He drove right to the heart of liberation and understood in a continuous stream, the unity of the Path and the Fruit and the factors for Enlightenment. He kept raising the Banner of Victory, often fearlessly, showing the investigative mind unified with mindfulness and awareness. He was a great explorer. He blessed everything in his path—sometimes by dissolving everything in his wake! Yes, he was fearless, he understood that liberation is not about institution building but both building and dissolving—he really practiced and manifested non-clinging. And that could frighten the boots off many and bring anger to some! He lived the ancient tradition of the Bhikkhu, the wanderer, the accomplished Yogi; in search for truth and to declare freedom, and always more discoveries to be made.

Rinpoche did not make it easy for some of us to meditate, but that made us even stronger. He always pointed to awareness, not to the meditation, even while teaching the most arcane points of technique. He was a tracker and a hunter of detail to bring out the majesty of God. Rinpoche was a big collector too! He loved to collect things, so as to better gain understanding and share the amazing splendor of nature and the crafts of all beings. He displayed and discussed the joy of life and the wonders of all that is: detail, detail, detail. He brought forth a universe of gifts for all manner of people and creatures to experience—but above all—he pointed to, from the moment I met him, the vast Guru Mind, Buddha Nature. It was like always being in a vast mandala of Awareness. The Wongkur was unbroken and unshakable.

I remember the first time I ever met him. In the early 1970’s Chorpel Dolma (Ms. Raff), my first Dharma teacher invited Rinpoche to bless the Sāvaka House in Toronto, where she was the teacher and I lived for a time. I was vacuuming and tidying up the teaching space when a tall man entered. There was instant recognition, a smile and a warm hello, “Oh, you, hello there”, as if we had known each other for many years. But what really struck me was the feel of his mind in my experience—like water merging with water it was like tasting a clear bright crystal field. There was no doubt at all in my mind that this being was highly awake and I wished to study and learn from him as much as possible. I had been waiting a whole year!

Rinpoche was very human in his quirks and ways, yet, with the combination of extraordinary awakeness, knowledge and wisdom, he was an astonishing presence. He lived an awake vivid life without stories and rarely referred to his past. Liberation flowed naturally in his cells. This was a palpable experience for many of us and was not something he had to think about. One day, after a class in Nelson, British Columbia, as we were climbing the stairs in my house, he turned back to me, paused, a light shone in his eyes, and he told me how much he enjoyed teaching from his direct experience and not having to read, rely on ancient texts or the writings of other teachers.

His legacy will live on not because of anything ‘particular’ at all—no institution, no religious dogma and no scientific theory—but like a perfume or essential oil, so gossamer and utterly refined—a legacy and dedication to vast exploration with consummate awakeness and compassion; to the joy of knowledge and sensing; to discovery; to visiting all places and worlds; to challenging every idea and tradition; to non-sectarianism; to fierce or gentle compassion based on realization; to contemplative mind and continuum of awareness—these are some of the main notes of the oil that lubricates this precious thread. Like the Venerable Namgyal Rinpoche, any attempt to organize, define, ritualize or structure it, will of course deaden this spirit and his precious lineage.

I rarely ever think about what I have learnt from Namgyal Rimpoche or stories about him. Now that I am prompted to do so, a few joyous simple words sprang up, and a handful of stories offered. Via this precious transmission I have grown to love blowing the conch shell of Dharma and discovery, for as many beings as possible, in the midst of confusion and misery, joy and laughter.

May all beings awaken quickly,

Download and Print
To read more about The Venerable Namgyal Rinpoche: http://en.wikipedia.org/wiki/Namgyal_Rinpoc